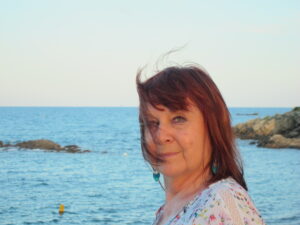 Maryvonne is French and grew up in Paris. After studying classical Indian dancing and music in India for five years, she taught in the ethnomusicology departments at Wesleyan University and UCLA. While teaching Indian music, Maryvonne discovered a taste for rock-and-roll, taught herself to play the electric bass, and exchanged her saris for platform boots.

Her daughter, born in New York, empowers children through the arts, one project at a time. Her husband is American and a talented recording artist who brought two sons and a hybrid wolf puppy into her life. They live in Hollywood, where Maryvonne shares her time between writing, playing the bass and enjoying her growing American family. After twelve very special years, BareWolf passed on. She now has two cats.

Maryvonne has published short stories and has translated several novels and screenplays to be optioned for movies. She’s currently finishing Mango Blood, a sequel to The 35¢ Dowry, in which Minouche discovers the overwhelming beauty of India, but also its darker side, as she wrestles with the challenge of being married and mastering India’s sacred dance and music.